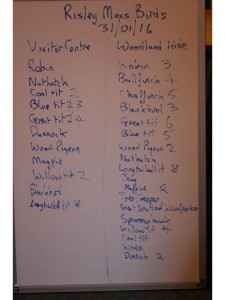 Here are the lists of bird species seen at the woodland hide and out of the main window at the Visitor’s Centre at Risley moss for the Big garden Bird Watch 2016.  Seen by Andy, Phil, Christine, Paul and Gaynor.

Although February is classed as a winter month, the first signs of spring are already starting to appear, especially if there are warm day time temperatures.

The resident birds are still visiting the Woodland Hide feeding station, but you can start to see the return of species usually seen only on the mossland such as Reed Bunting and Yellowhammer. Their arrival increases the chance of beating the record of 20 species during a visit.

These species will eventually nest on the mossland and arrive back early to start claiming territories. They were driven off in the autumn by the lack of food. As food on the mossland is still scarce in the early spring, they often take the opportunity to ‘refuel’ at the feeding station.

Although there are no leaves on the deciduous trees yet, some are already starting to show flowers as a further indicator of spring. Most noticeable are the white flowers on the branches of the Blackthorn (the source of sloe berries), the yellow hanging catkins on the Hazel, and the ‘Pussy Willows’ on the various Willow species trees on the site. These in turn provide pollen for early flying bumblebees, particularly the Red-tailed Bumblebee. If the weather is particularly warm, you may see the early flights of butterflies that have over-wintered as adults. The most likely species you can see is the bright yellow coloured Brimstone. It is thought that the similarity of the yellow colour of this species to that of butter is the reason they are called butterflies.

RIMAG have been selected as one of the local charities in the ASDA Green Token Scheme for January and February.  Can you all remember to pick up a token and drop it in the RIMAG box in ASDA, Birchwood over the next two months and we will hopefully reap some reward to go towards the cost of Green Safari Day 2016.  Can you also promote the scheme with your family, friends and work colleagues.

Because of the natural food that was still available during the mild weather in December, there were fewer than usual birds at the Woodland Hide feeding station. There will probably not be large numbers until we get some colder weather (especially if it snows), which makes natural food harder to get at and hence the birds will have greater dependence on the supplied food. Even so, I recorded 18 species in half an hour just before Christmas, so it shows that there can be plenty to see if you choose the right day. For the record, the species I saw are listed below. You could easily see most, if not all, of these.

I could have scored 20 (equalling the record) if I had also seen the goldfinch in the trees and the Sparrowhawk that flew through when I visited the following day. You don’t tend to get a good view of Sparrowhawk as usually some small birds see it coming and fill the woodland with alarm calls to warn the others. All you will see will be the small birds scattering as a larger bird flies through rapidly, disappearing as quickly as it appeared. It does however occasionally stop on a post (probably cursing its luck at missing out again) and is a stunning sight if it does. This is the male.

Because birds get used to the food put out by Rangers and to the number of visitors, the birds are not usually disturbed people being in the Hide if you are quiet. This makes them comparatively easy to photograph, and a great place to practice taking wildlife photographs if you have been lucky enough to receive a camera for Christmas. However, the birds are still vigilant against potential attack, for example  by the local Sparrowhawk, and will scatter if they are alarmed. All of the food at the Woodland Hide is sponsored by RIMAG at a cost of around £500 each year; there is a donation box in the Visitor Centre if you have enjoyed your visit and would like to make a contribution towards it.